On Tuesday, April 17, 2018, theaters around the country will do a one night screening of the new documentary The Dating Project. I first saw it last spring, had a prescreening of it at the National Catholic Singles Conference last May, and am going to see it again on Tuesday.

WHY is a movie like this so important and so worth watching? Having been single (as in, unmarried) for … well, my whole life, I’ve had lots of time to think about this thing called “dating.” (In fact, I could probably write an entertaining novelette about my own experiences with it.)  When I was young, my father assured me (and the rest of his daughters) that men would be lined up outside the door to date us once we turned sixteen. (In fact, my sisters and I would play a game while doing the dishes after dinner. One of us would play the role of the protective, intimidating father while another one played the role of the unfortunate boy being interviewed in an attempt to date one of his daughters.) But I don’t think my father could have predicted how drastically the dating scene would change by the time his children grew up. He certainly didn’t imagine it would look anything like what we hear about in The Dating Project. 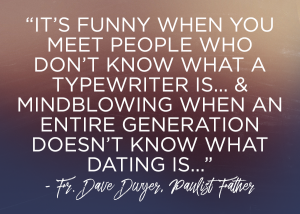 In my mid-teens I was introduced to the whole idea of dating versus courtship, the main idea being that intentional “courtship” was the healthy, Christian thing to do, whereas “dating” was something dangerous that the world did. At first glance, the idea of “kissing dating goodbye” in favor of courtship, an idea promoted in Joshua Harris’ book I Kissed Dating Goodbye (1997), seemed to be a good one. (Harris had some valid points and this article is not attempting a comprehensive critique of the various arguments made.) But upon further thought – and twenty years of experience – I’ve since reconsidered. Yes, part of it is about how you define your terms. Dating should be for the right reasons – not just a casual arrangement of using someone for company, sex and/or romance. Its purpose should be meeting and getting to know people for the sake of finding one’s future spouse. But now we have a situation where people aren’t dating. Period. Either because they’re hooking up instead – or because they just don’t know how to date. As documented in The Dating Project interviews, we’ve almost completely lost a roadmap for male-female interaction. 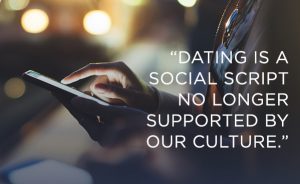 And yes, “kissing dating goodbye” is part of the problem. While there are many other reasons which contribute to the singles phenomenon and the crisis in dating, one of the pieces of the puzzle amongst Catholics seems to be a vicious cycle which is resulting in fewer dates, not more. The “chicken and the egg” debate is beyond the scope of this article, but the cycle basically looks like this:

Men aren’t asking women out. And so women, for whom being asked out is a rare occasion, can become overly enthusiastic when it actually happens. Instead of interpreting it as “he’d like to have a chat and get to know me and see if we enjoy conversing,” a woman thinks, “he must really like me a lot” and starts trying to figure out if his last name will pair well with her first name. Having been converted to the idea of “courting” since they were teenagers, some women think the gent’s request for a date must practically be a marriage proposal. (Hence the women logically turn down first dates that aren’t immediately obvious marriage material.)

Meantime, the men are simultaneously frustrated because, when they do get up the courage to ask a woman on a date, they often get rejected – for all of the reasons listed above – and because if they ask “Woman A” out a couple of times and it doesn’t go anywhere, then it automatically rules out future dates with 75% of the women in the young adult group (Women B through L) who happen to be friends with Woman A. Having been discouraged from asking women out, and hence being rather out of practice, they ask fewer and fewer women out. And eventually everyone is stuck just “hanging out” in the local young adult group until they age out of said group. This is a far cry from the days of my 92-year-old grandma, who would innocently go out dancing with a different young man every week. That kind of interaction was the norm. Going out on a date wasn’t a big deal and hence it was easier to do. (For the record, she and my grandfather were married for 70 years when he passed away.) 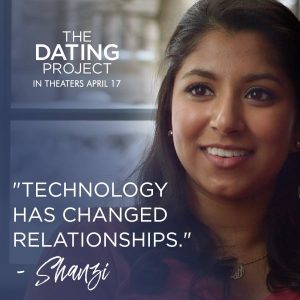 Are there other reasons for the decline in dating and the record number of singles today? Absolutely. But my point is that we must face the fact that we’ve lost a working social construct in which men and women can meet – and hopefully eventually come together in the Sacrament of Marriage. Not having a roadmap means not knowing what to say or how or when to say it. People end a conversation or a date by saying, “I really enjoyed talking with you,” and “I hope we can do this again” – and then fall off the face of the earth with no explanation (aka “ghosting”). (Technology makes this kind of confusing behavior an easy way out.)

Is this disturbing? Yes. Can dating be resuscitated? YES! Presenting the every-day experiences of college students and individuals in their 20’s, 30’s and 40’s, The Dating Project not only gives gives voice to what many singles are experiencing today, but it can occasion the launching point for a discussion of what to do differently. 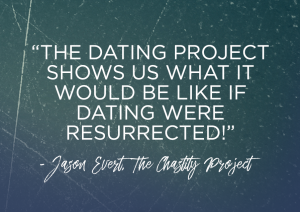 Though the National Catholic Singles Conference isn’t just about dating, it provides resources and sessions which can help us to date better and have healthy relationships. Normal people – who happen to be single – meet, network, share their experiences, pray together, and connect in a relaxed and fun setting. Over the last fourteen years people have made new friends from across the country (and internationally!), heard life-changing talks, and encountered God in a powerful way. Some (including my sister) have even met their future spouses and gotten married! Since marriage is a sacrament which brings grace to the world, I think that’s a great thing!

But whether we singles meet our future spouse at the conference or not – the main goal is to live our single lives with purpose and passion, entrusting our futures to God and making the most of the present. And if we want marriage to be part of that future, let’s not be daunted by past dating experiences (or lack thereof), and let’s go out on a few more dates! 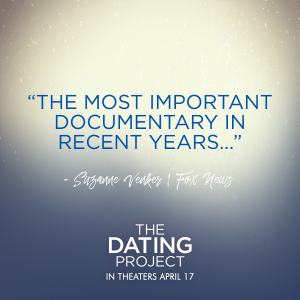