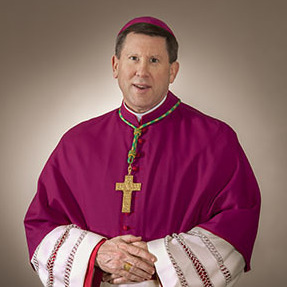 Bishop J. Mark Spalding, the oldest of three children, was born on January 13, 1965, in Lebanon, Kentucky, and was baptized at Holy Trinity Church in Fredericktown, Kentucky. His mother Mary Aileen Thompson grew up on a farm in Marion County and his father Joseph Lawrence Spalding was raised on a farm in Washington County. After their marriage, the Spaldings raised their children on a family farm in Washington County. Father Spalding attended Fredericktown Elementary School and Bethlehem High School in Bardstown.

After graduating in 1983 from Bethlehem High School, Bishop Spalding attended college at Saint Meinrad Seminary, graduating with a bachelor’s degree in history in 1987. He attended major seminary at the Catholic University of Louvain, Belgium where he earned an M.A. and an S.T.B. in Religious Studies in 1990.

Bishop Spalding served on the College of Consultors, the Priests’ Council, the Archdiocesan Planning Commission, the Development Council for the Archdiocese, and the Catholic Services Appeal Pastors’ Committee. Other assignments included serving as presbyteral moderator at two parishes as well as filling the role as priest-chaplain at Bethlehem High School from 1992 to 1996, and at Sacred Heart Academy in Louisville from 2011 to 2017.